Best Restaurants To Visit In Berlin

Only a few years ago, a culinary elite from the more moneyed cities of Düsseldorf and Frankfurt might have insisted there was no truly outstanding food in Berlin. Sure, it’d be all too easy to stumble through a weekend in Berlin fuelled on nothing but doner kebab and Club-Mate, but the Hauptstadt boasts all manner of life-changing meals you shouldn’t miss out out on. The art, as always, is knowing where to look.

For a cheap and cheerful midday plate of hummus and fresh veg, head to Neukölln’s Sonnenallee, or to the one of several venerable Israeli joints in Prenzlauer Berg. Meat-eaters should try Kreuzberg’s köfteci and ocakbasi for stomach-warming grilled lamb, lentil soup and fresh bread served late into the night. Alternatively, you could shell out to see what this year’s Michelin hype is all about – the buzz is well earned, by the way – or snuggle up at one of an array of newly opened bistro-cum-wine bars cropping up around Berlin’s coolest neighbourhoods. How’s that, culinary elite?

Part of the Grill Royal gourmet empire, Kin Dee has proven a worthy successor to Thai-Berliner institution Edd’s. Head chef and owner Dalad Kambhu strays into similar fusion territory, serving creative fine Thai cuisine with a focus on fresh, high-quality ingredients. With its set menu of small plates, excellent vegetarian options and a well-chosen wine list, Kin Dee has already won over the locals – and was awarded its first Michelin star in 2019. This makes Kambhu the youngest woman ever to receive the honour in Germany. How better to celebrate than with a meal you won’t be forgetting any time soon?

One of the city’s best-known venues, the riverside Grill Royal is a stylish, friendly and exceptionally meaty experience. Not for vegetarians or anyone on a diet or budget, Grill is as brilliant for people-watching as it is for its (stoutly priced) steaks and seafood. The meat is sourced from local suppliers as well as from Argentina, Ireland and Australia. The walls are adorned with rather striking soft-porn art from the owner’s collection. Reservations are essential.

Unlike many of Berlin’s fine-dining establishments, this small restaurant prides itself on its informality – despite its place at number 37 on the world’s best restaurants list. The tasting menu might include amuse-bouches of spicy cashews, prawn sashimi and marinated pork belly, moving on to main courses of wagyu beef, lobster, Australian winter truffle and tofu. Everything has a Japanese touch and comes served with blobs, smears or foams of contrasting flavours and colours. Book ahead.

Offering a menu composed entirely of desserts and drinks, concept restaurant Coda earned its first (long-awaited) Michelin star in 2019. Masterminded by chef René Frank, its plates are artfully composed, use only the freshest ingredients and place an emphasis on the experimental. Come by for the blowout six-course tasting menu which pairs desserts with drinks (from €98). Alternatively, head to the bar for a superlative cocktail.

Recent opening Malakeh’s Syrian cuisine is as mouth-watering as its origin story is heartwarming. Owner Malakeh Jazmati has no formal kitchen training, but once found a following as Syrian TV personality Maliket al-Tabkh (‘the Queen of Cooking’). Driven out of her country by the war, she came to Berlin in 2015 and has set up this restaurant with her husband Mohammed. As a poignant reminder of the home she left behind, Malakeh is decked out with pictures of Syrian artists and activists. Food-wise, expect excellent kibbeh in a yoghurt sauce, moreish fried aubergine and some of the city’s freshest tomatoes.

This restaurant’s tagline is ‘vocally local’ – meaning they refuse to import food from beyond the capital and its immediate surroundings. Sadly, that also means no chocolate. However, chef and sommelier Billy Wagner will win you over to the cause: he uses neglected traditional methods to create a seasonally shifting menu packed with bold, contemporary flavours. The frontage is nondescript, visible only to those in the know, and you have to ring a bell before being ushered around a long wooden table with just 28 seats. Booking is, unsurprisingly, essential.

Fancy a side of history with your main? Eins44 serves exquisite fine dining in the industrial surroundings of a former schnapps factory. Proving there’s a place for high-end eating in down-and-dirty Neukölln, the restaurant serves both lunch and dinner. Lunches tend towards the classics, while in the evening you can pick three (€46) or up to six courses (€73) from flexible menus featuring seasonal dishes such as venison with shiitake mushrooms and prawns with vermouth and yellow beetroot. 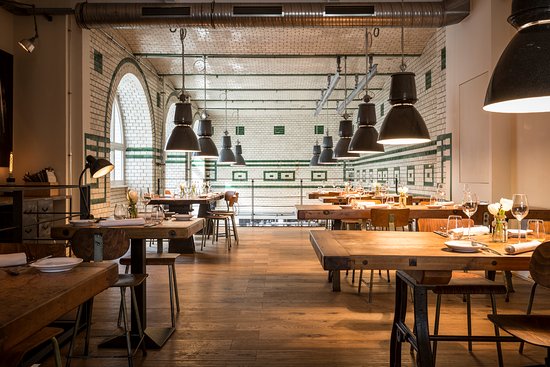 Kumpel & Keule serves something startlingly rare in the German capital: high-quality, regionally sourced German cuisine with genuinely friendly service. It’s worth skipping lunch and going all-out at their Kreuzberg restaurant, whose menu offers modern takes on German and international butchery. Why not try the dry-aged steak menu or the handmade pork sausage? Alternatively, explore the menu’s more surprising side – we’re talking things like rabbit’s kidney with parsnip puree. Finish, if you’re up to it, with a round of homemade schnapps.

The shawarma at Shaam, a popular Syrian spot on Karl-Marx-Straße, may well be the best in Berlin, and the toum is so garlicky that both parties on a date should be required, by law, to dig in. That’s not a criticism; the sauce adds the perfect zing to the shawarma’s heavenly blend of crispy (the bread) and fatty (the meat). There are plenty of lighter, herbivore-friendly options, too, and everything comes with crunchy fresh veg to dip. Order a few plates to share.

Until recently, Scandinavian food had been oddly underrepresented in Berlin. Perched on what they’ve coined ‘the riviera of Neukölln’, Palsta’s prime location allows guests to look out over Tempelhofer Feld while enjoying any number of Nordic bistro treats and quality wines. The seafood starters, such as the shrimp tartare or grilled asparagus with salmon roe vinaigrette, are the high point of an already strong menu.